His world-famous restaurant, Le Bec-Fin, was one of the most renowned restaurants in the world for 44 years. Now, Georges Perrier is the inspiration behind Bistro Perrier, a classic French bistro at Walnut Hill College. The restaurant will showcase traditional French fare, led by Executive Chef Todd Braley. 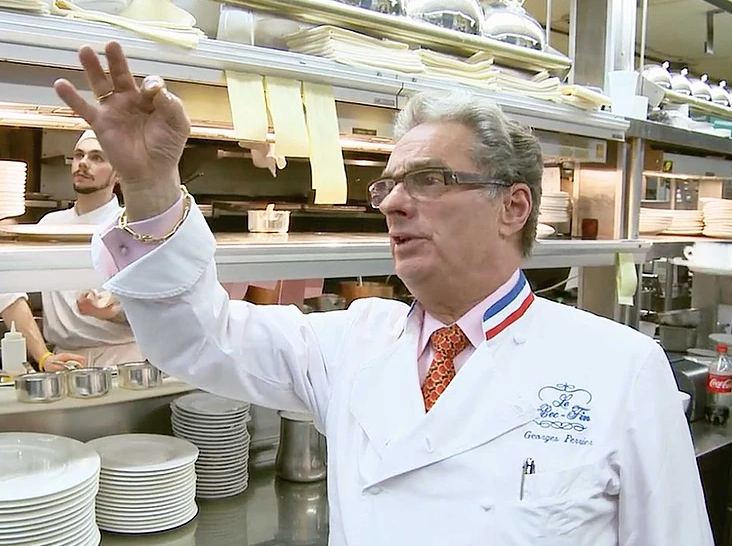 Known for bringing French cuisine to the forefront of Philadelphia’s restaurant scene, Georges Perrier is a culinary legend in the city, and he’s been a long-time friend of Walnut Hill College. Chef Perrier became Master-in-Residence at the college in 2017, and he began his role at “Le Bec-Fin Redux,” a one-night-only reprisal of his famous menu in the restaurant that would later become Bistro Perrier. That summer, he would go on to lead a lucky group of food and wine enthusiasts on a gastronomic tour of France. Much like the tour of France that our culinary and pastry students take, this unique trip with Chef Perrier and fellow French chef Esther McManus included visits to farms, vineyards, wineries, and restaurants throughout the Champagne and Burgundy regions, as well as a jaunt through Paris. The group received insider insight and exclusive access to French eateries as Chef Perrier’s special guests, making their trip a once-in-a-lifetime experience. Down the road, Chef Perrier will also help guide the careers of young culinarians at Walnut Hill College. He’ll teach classes, host special dinners, and lead workshops for professional chefs on the WHC campus. Imagine how a young culinarian will feel as Chef Perrier guides them and inspires their career. It is truly a life-changing opportunity.

About Georges Perrier:
Originally from Lyon, France, a city world-renowned for its culinary arts, Chef Perrier began his accomplished culinary career at age fourteen. He trained with the great chefs at some of the finest restaurants of France, including Michel Lorrain of Casino de Charbonnières near Lyon, Jacques Picard of L’Oustau de Baumanière in Provence, and Guy Thivard at La Pyramide in Vienne, owned by the legendary Ferdinand Point. Chef Perrier arrived in Philadelphia in 1967 as Head Chef for Peter von Starck’s La Panetière. Three years later, Perrier opened his own restaurant at 1312 Spruce Street. He named the restaurant “Le Bec-Fin,” a French idiom for “the good taste.” The small restaurant quickly became a Philadelphia institution. The restaurateur refused invitations to relocate to Manhattan, Los Angeles, and Chicago, opting instead to pave the way for Philadelphia’s restaurant renaissance. Visitors to the city considered Le Bec-Fin an essential stop, and regular patrons traveled from New York and Washington D.C. for a single meal.
During its forty years in operation, Le Bec-Fin and Chef Perrier received the highest accolades in the hospitality industry. Le Bec-Fin was the only Philadelphia dining establishment to receive the five-star rating from the Mobil Travel Guide for a total of twenty-three years in a row. In 1994, readers of Condé Nast Traveler magazine chose Le Bec-Fin as the #1 restaurant in the country. The restaurant also garnered top honors in prestigious publications such as Gourmet, Food & Wine, Esquire and Wine Spectator magazines. In 1998, Chef Perrier was honored by America’s leading culinary organization when he was awarded Best Mid-Atlantic Chef by the James Beard Foundation. Chef Perrier’s first book, Georges Perrier Le Bec-Fin Recipes, was published in 1997 and contains more than 100 recipes. In 2009, Chef Perrier was in Paris, France to receive the highest French honor bestowed on a person who distinguished themselves through civilian or military valor, the Legion d’Honneur. In 2010, Chef Perrier received the Academiciens de l’Annee, the high honor presented by the Academie Culinaire de France. (Bio courtesy of AudreyClaireCook.com.)
Previous Post Next Post Blog Home