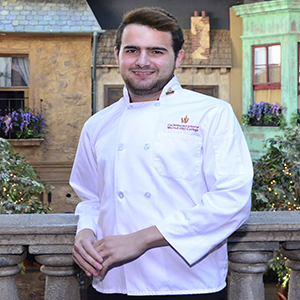 All the way from a small village called Majdal Shams on the border between Syria, Israel, and Lebanon, Kenan made his way to the states in order to fulfill his dreams. The simple lifestyle of the village, good people, fields of apples and cherries, the smell of fresh bread and roasted coffee beans, his grandmother’s food, and his supportive family …. all are elements that inspired Kenan to chase after his dreams and make them come true, even if he had to move to another part of the world. Kenan started his career at the age of 14, when he had his own bakery back home, and he also got great experience helping out at a hotel that his family owned. His goal now is to define his identity and culture after they went undefined for so many years during the Israeli occupation and political conflicts in that area. A graduate of Walnut Hill College’s Culinary Arts program, Kenan received his associate degree in July 2016 and his bachelor’s degree in March 2018.