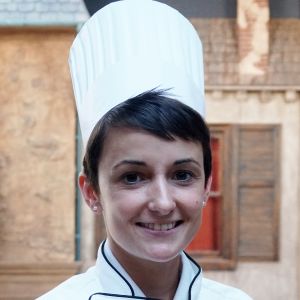 Chef Jackie Lovecchio was born and raised in rural Pennsylvania into a large Italian/Irish family. Her childhood was littered with farm work, extensive family meals, gardening, and learning the importance of self-sustainability. After graduating high school, she attended Pennsylvania College of Technology. While working full-time in several local restaurants and pubs, she earned a Bachelor of Science Degree in Culinary Arts and an Associate of Applied Science Degree in Hospitality Management. During her time in college, she was selected for working internships to include several Kentucky Derbies as well as the Ryder Cup, where she got her first experiences with high-volume production and execution.

Following graduation, Chef Lovecchio moved to the palm trees of Savannah, Georgia to become the executive sous chef at The Bohemian Hotel, where she got her feet wet with authentic Southern cuisine. She learned what it meant to really “stick your foot in it” when it came to slow-cooked greens and traditional gumbo. After spending several years at the hotel, she was presented with the opportunity to be part of an account opening team with Bon Appetit Management Company. Her position as an executive sous chef included managing multi-unit independent outlets, including coffee shops, several diners, food trucks, sushi concepts, grab-and-go programs, a deli, cafés, and student markets. She also traveled to several other accounts to assist with openings and production. She visited Colorado and was promptly transferred to Colorado College.

Within Colorado College, Chef Jackie wore many hats. She managed the student cafés and Catering department, assisted the front-of-house catering operations, and became the executive chef of Taste Restaurant at The Fine Arts Center. After several years learning the cuisine of the west, it became time to return to the fertile soils of Pennsylvania. In her free time, she enjoys building relationships with local farmers and artisans through community engagement, traveling, tap dancing, and yoga.