Lessons in Foodservice & Hospitality at HX: The Hotel Experience Show

Ah, New York City. The only place where you can spend $500 on a tasting menu with a wine pairing and then eat a $2, albeit delicious, food cart hot dog. A culinarian €™s wonderland! Given New York €™s reputation for setting food and hospitality trends, it would only make sense that an event for foodservice professionals, students, and various food technology companies would occur, right?

Correct! Formerly the International Hotel, Motel and Restaurant Show, HX: The Hotel Experience aims to provide trends, new equipment, and plenty of networking spread over three days, usually in November. (Mark your calendars for 2017!) To provide some background as to why I attended the Expo, I €™ll have to give a shout out to Ms. Brooks and the Hospitality Engagement Club, who kindly asked me to represent Walnut Hill College at this year €™s HX. Of course I jumped at the chance, booked a ticket for Amtrak, and was good to go. So let €™s fast forward to Sunday, November 13th.

Armed with a smile on my face, coffee in hand, and WHC pin on my suit jacket, I was beyond ready to absorb information, fill my wallet with business cards and my belly with free samples. After a quick 10-minute walk from Penn Station, I entered the Javits Center, got my name tag and entered HX. Being a culinary student, I €™m drawn to shiny equipment and anything that can shoot out flames like a jet engine, so it only made sense to check out the Hestan Commercial booth, which consisted of a beautiful oven suite boasting four open-burner stovetops, a French top (a solid cast iron stovetop that houses the flame beneath the metal), and a plancha (for searing proteins). 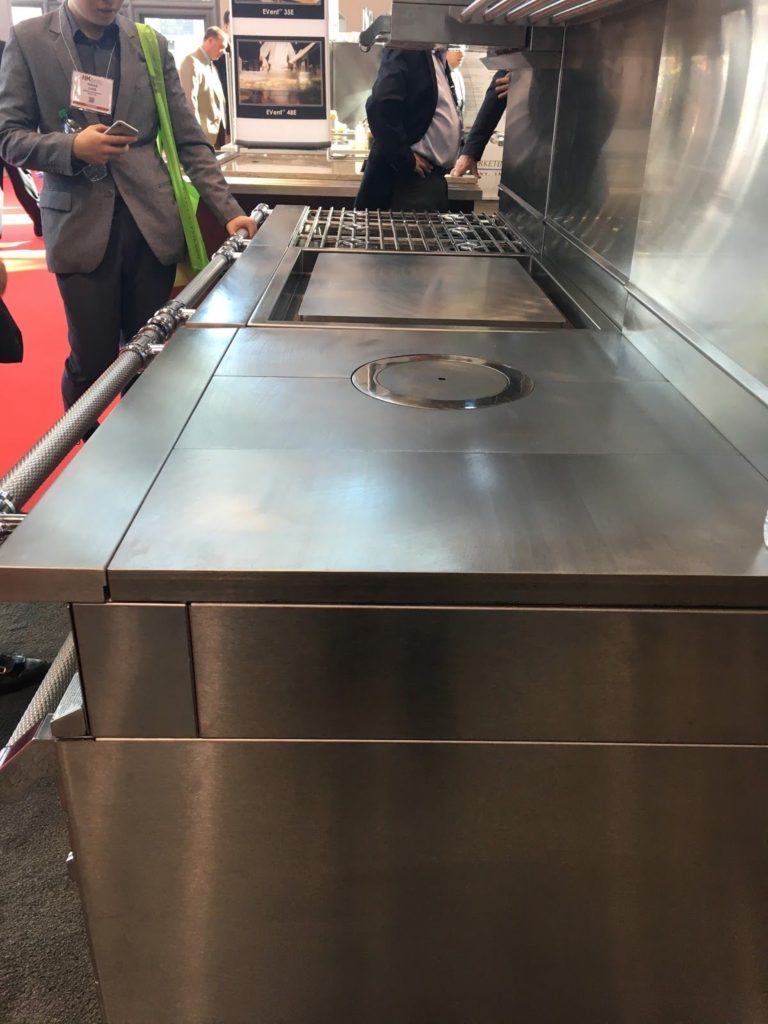 After picking my jaw up off the floor due to the equipment €™s finesse and beauty, I discussed various customizations and some local clients with a Hestan company representative. I continued to marvel at other stoves, ovens, and even a soft serve machine, which I was a huge fan of due to the free samples I received! 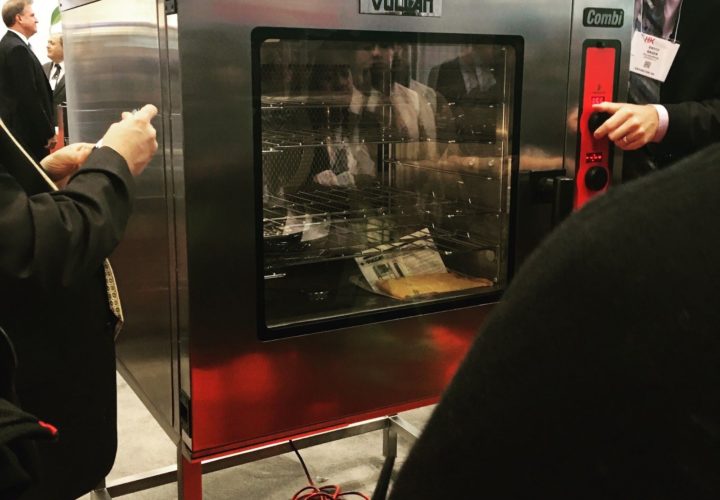 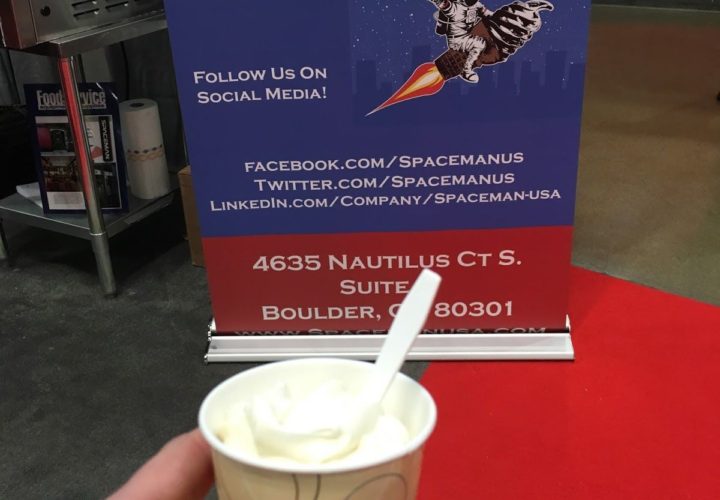 Another great aspect of HX were the numerous conferences held, one of which covered the idea of commercial kitchen designs/makeovers. What I found most interesting was a statement by one of the gentlemen on stage, who tied in the almost too famous quote, €œIf you can €™t stand the heat €¦ € you know the rest. He stated that, in a study done by a hospitality research company, if the temperature goes above 10 degrees an employee €™s comfort level, their productivity level decreases by 30%. Food for thought, and an interesting mention! Other topics discussed were the right questions to ask regarding kitchen design, such as kitchen design flaws (hooking up a gas line to a steamer instead of a water line–yikes!) and keeping an appropriate and steady budget. These are all things that I found important, especially if someone wants to open their own operation.

My final piece, a sweet ending if you will, involves the topic of something we all know and love. Male or female, short or tall, Democrat or Republican, everyone loves chocolate! The story takes a nice turn at this point, caused by my fellow Bachelor student Kenan Rebah meeting me for this portion of my day! The last presentation, hosted by the former pastry chef of the world renowned Le Bernardin, Chef Michael Laiskonis, was hands down my favorite. Now the Creative Director for the Institute of Culinary Education (ICE) in NYC, his main focus is the Bean to Bar process of chocolate making. In novice terms, this means that Chef Laiskonis receives the dried cocoa beans in his lab, roasts them, and then separates the cocoa nibs from the shell during a process called €œwinnowing. € He then grinds, presses the cocoa butter, and refines the cocoa liquor, at which point he adds sugar and other additives, such as milk powder.

After the refining process, conching is done, and this step improves texture and promotes moisture reduction. Science (and my own experience) proves that water and chocolate do not mix, so you get the idea! One last note to touch upon is that Chef Laiskonis has been experimenting with aging the chocolate bars he makes. It may seem odd at first, but when put in the same rich category as wine and cheese, the decadent sound of €œAged Dark Chocolate € sounds great. We were given samples of chocolate from June, and it was amazing! I noted flavors of slight smoke and a lot of citrus. After indulging in a bar or two, Kenan and I spoke with Chef Laiskonis about his role at ICE and discussed checking out his chocolate lab, and we even got a picture! 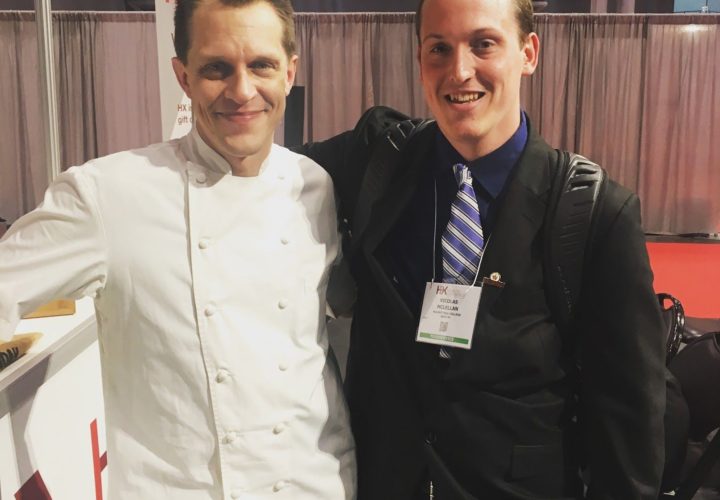 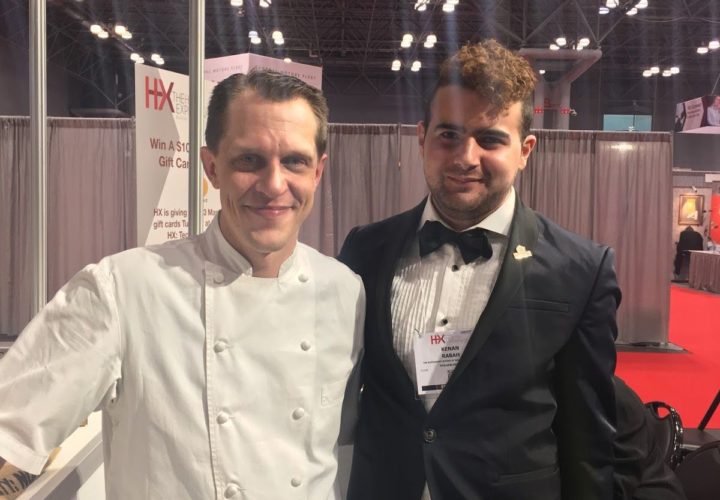 In a nutshell, HX is extremely valuable to young hospitality students because of ALL the exposure achieved. From the connections made in the undisputed restaurant capital of the world (Philadelphia is becoming close competition!), to the industry leading professionals discussing current and future trends, to observing just how vast our field really is, I truly enjoyed my experience and encourage my fellow students at Walnut Hill College to check it out in the future!