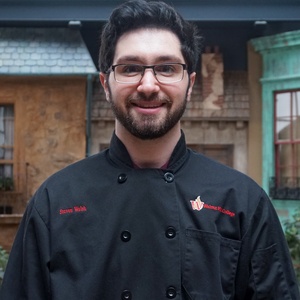 Steven Walsh is a Culinary Arts major who is driven by his passions, love for food, and hospitality. Sustainable agriculture and fresh, seasonal cooking are what got him started on his culinary path. Having taken some time away from university from 2016 to 2017, he lived in and volunteered at a farm community created to assist disabled adults. There, he provided personal and elder care, general nutrition, and meal planning, as well as farmhand services. Being immersed in a fully-functioning farm community, he was able to have access to fresh dairy products, vegetables, fruit, and other seasonal goods. By having the ability to cook with what he helped to grow, Steven learned different techniques as well as varieties of plants and their growing seasons. This led to his desire for a formal culinary education as well as a career in the foodservice industry. He hoped to be able to hone his interests into a craft in which he could provide the highest quality food and produce to others.

Steven took a lot of inspiration from those who raised him. One of his strongest role models is his grandmother, who would always prepare his favorites, matzoh ball soup and chopped liver, when she came for a visit. He remembers her always taking such good care of everyone and making sure that everyone had full bellies and smiles on their faces. His grandmother was always known throughout her family and community to be kind and selfless in her actions. This type of hospitality and care for others is something that Steven wants to expand upon throughout his career. He believes that one of the core tenets of hospitality is respect for others, which is something he learned from his family. While keeping these beliefs in mind, Steven hopes to carry the kindness and hospitality his family has shown him into the culinary field. He is constantly striving to better himself and hopes to learn as much as possible in his time here at Walnut Hill College.