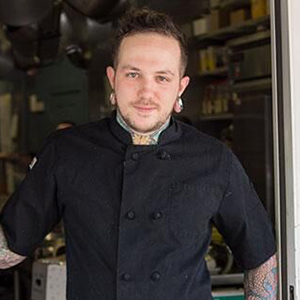 “When his girlfriend noticed this former bike messenger and CAPA art school graduate pouring his energy into cooking every night, she urged him to enroll in The Restaurant School at Walnut Hill College. Her suggestion paid off. After starting as a line cook at 1601 and Bridget Foy’s, Swain joined Rex 1516 as opening sous under Regis Jansen. When his mentor fell ill in January 2013, he stepped up and has been running the Southern comfort kitchen on South Street West ever since. Though he was still in school when he took over the top spot, Swain has since graduated—as valedictorian.”