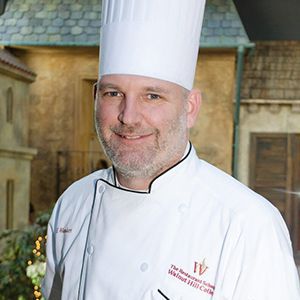 Chef Greg Slonaker graduated from the Culinary Institute of America with an A.O.S. degree in Culinary Arts. During his career, he served as a line cook, restaurant chef, and executive sous chef for The Rittenhouse Hotel and was Executive Chef at Coleman Restaurant at Normandy Farm Inn and Conference Center. Additionally, he was the Food Production Manager for the PBS show Flavors of America and co-authored a companion book to the TV series. Chef Slonaker received the title of Certified Executive Chef from The American Culinary Federation in 2015.