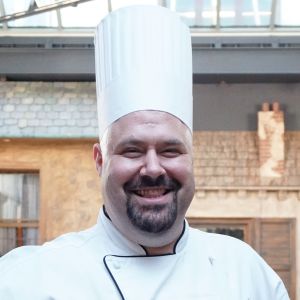 Chef Eric Paraskevas hails from State College, PA. In 2001, Eric relocated to Philadelphia to dive into his love of the culinary arts by attending The Restaurant School at Walnut Hill College in pursuit of his bachelor’s degree. Upon graduating in 2004, Eric moved on to work his way through local Philadelphia restaurants like The Happy Rooster, The Continental, and Lolita, where he would eventually become chef de cuisine.

In 2009, Eric moved on to his first independent position as executive chef. He has since successfully opened and operated the kitchens of Slate and Terra restaurants. Chef Paraskevas has also had a few opportunities to appear on various Food Network shows, including Chopped.

Chef Paraskevas firmly believes in charity work and has given back to the Philly community by participating in events like The Appetite for Awareness, The Flavors of Philly, The Red Ball, Manna’s Guac Off, raising money for Philabundance via The Preston & Steve radio show, and many others.

In addition to his charity work, Chef Paraskevas has quietly championed the locally sourced food movement for years, forming great relationships with some local farmers. He has even gone so far as to create his own 500-square-foot garden, where has a Meyer lemon, fig, and plum tree and grows various berries, horseradish, melons, asparagus, grapes, and much more. This allows him the opportunity to develop a deeper connection to the food he serves.

Currently, Chef Paraskevas is the executive chef and, along with his wife, Eleni, owner of the Bainbridge Street Barrel House, a craft beer and bourbon gastro pub serving upscale comfort foods.

All of Chef Eric’s experiences have led him to develop this philosophy: Great food, beautiful plates, and a proper dining experience are ultimately about simplicity.