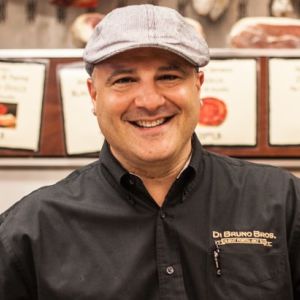 “Emilio is a third generation owner at Di Bruno Bros. and serves as the Vice President of Culinary Pioneering. He’s always on the quest for the latest and greatest eats and loves telling the stories behind them. His expertise and passion for food has helped him to grow the cheese offerings at Di Bruno Bros. from the 50 varieties it offered in its earlier days to well over 600 cheeses from all over the world–each with their own unique story. He’s helped write the esteemed Certified Cheese Professional Exam—the highest standard for cheese professionals—and has been recognized for his work in the food industry. In 2010, the Italian Trade Commission acclaimed Emilio for “Distinguished Service” in importing, representing, and educating on Italian food and culture. The James Beard Foundation also honored him for his help in making Philadelphia a world-class food city.”