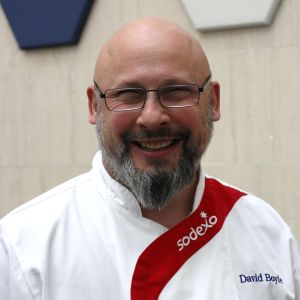 David Boyle is Senior Manager, Area Support Culinary, for Sodexo. He guides the culinary program for a national account with nine locations in three states and the island of Puerto Rico, and he also supports other accounts in the tri-state area with openings, cafe renovations, staff training, guest chef appearances, and more.

Born in Philadelphia, David grew up in a suburb of Anchorage, Alaska. He returned to the City of Brotherly Love when he enrolled at Walnut Hill College (then called The Restaurant School). During his time at the College, David completed an externship at the Four Seasons Hotel in Philadelphia, where he is credited with creating the Philly Cheesesteak Spring Roll. David stayed with them for another year at the Michelin Hotel Restaurant in Le Grande Monarque in Chartes, France. Throughout David’s career, he has enjoyed time as executive chef at both Jake’s in Manayunk, PA and Davio’s in Philadelphia, PA.