Over the course of my two and a half years here at Walnut Hill College, I’ve learned many things that have helped me to develop as a professional. I’ve been in classes that have helped me in the hospitality industry, and through the different challenges of being in college, I’ve also learned how to be a better, stronger person. Throughout the time here and through all of the experiences I’ve had and learned from, whether in class or at work, the most important thing I learned is that when you ask for help, you bring people together, and you are more powerful with the help of others than you are by yourself.

I came to see how true this is when I and a few other fellow students wanted to cook for a community-centered church for Thanksgiving. In the beginning, I had the idea of cooking and serving hot food at a church for those in the community who may or may not have the ability to cook for themselves on Thanksgiving. I presented the idea to Dean Morrow and he helped me narrow down what it was that I wanted and how then to execute it. After talking with Dean Morrow on multiple occasions, I talked about it with other students and many teachers over the course of about a month. This allowed me to get many perspectives on the situation and even better (though not always) alternatives to do it.

After a month of planning and creating a menu and talking (and talking and talking) about what and how we were going to do it, we had a plan. While talking with the church, we came to the conclusion that we were going to need food for around 200-300 people and, in order to get the food, we were going to host a few food drives. We reached out to the whole College and asked whoever felt willing to help us with the cause to donate food. Our first order of business: a can drive for vegetables. Then a week before Thanksgiving, we asked for items such as turkeys and spices and other items for stuffing and mashed potatoes. To be honest, I was nervous and very much scared that we wouldn’t get enough food. There were a lot of people to serve and the church had us scheduled. There was no way I could back out now! And just two weeks before Thanksgiving, we had no food and not enough money to buy the food if no one donated. 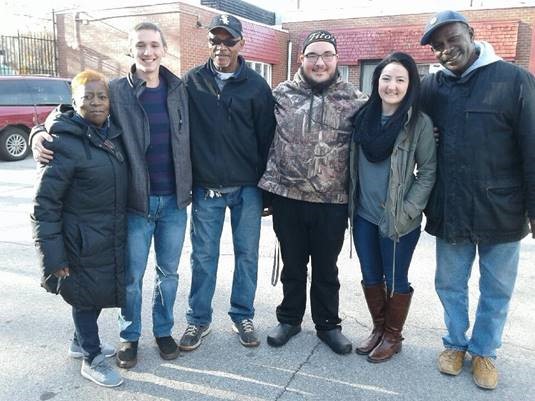 However, almost as soon as we gave up on the idea of people donating, we were overwhelmed with how many people, when asked to give, were willing to give. In the first can drive, the students donated over 200 cans, which alone was enough for what we needed in that area. In the course of the next two weeks before asking for perishable items, the teachers and faculty raised another 100 cans in various ways. Finally, in the week before Thanksgiving, when we set up a table on campus for perishable items, we received over 15 turkeys from different people, over 80 pounds of potatoes, 30 pounds each of carrots and onions, 15 pounds of celery, and 15 boxes of a variety of spices. On top of these donations, the Walnut Hill College community gave over $300 in cash, with which we were able to buy another 10 turkeys and dessert for the entire church–which was something I hadn’t thought we were going to be able to do.

As a result of the generosity of the people here at the College, we were able to serve over 600 people on Thanksgiving Day. It may have been my idea, but it was more than just the idea that made it possible. It was the people at this College! From Dean Morrow and Dr. Seery, who helped me to turn this idea into something possible, to Ms. McAmis, who brought a huge amount of energy to the plan, to Mrs. Bloome, who helped me to stay organized, to the Maintenance team, who transported the food to the church and put up tables and stands, it wasn’t an idea that allowed this to happen, but a collaboration of everyone at the College being willing to help. When people come together, great things can happen–“strength through unity,” you might say.

There is this stigma everywhere I look that suggests that asking for help is a sign of weakness; however, asking for help is, to me, a sign of strength. It shows that you are able to look at a job or task and say that it will be much more successful if you have others help, and I learned that through this Thanksgiving dinner. I asked many, many people to help me with this project, and every one of them came through to create this dinner that I could not have been happier about. Finally, the people at the church were blown away by the results of the giving nature of both the students and the staff at Walnut Hill College.

Life can be distracting, causing us to turn assignments in late, be forgetful, or even lose focus on the important things. I know that distractions affect me and take me away from the order of importance in my life. One thing that keeps me grounded in what I’m doing is my passion for this College and for improving myself. Sometimes, when I am feeling uninspired, I take a moment and talk to some people who inspire me, including my close friends and alumni. Even seeing other people’s passion sometimes inspires me. I believe it is important to find some time to figure out what new things can inspire you. Our College has a slew of alumni success stories, and it’s extremely inspiring to see where our alumni have ended up and what they have done.

Now that I am coming closer to the end of my time here at Walnut Hill College, something I find inspiring is that our College gives us the chance to show our passion in the bachelor program and create a menu together in the course Hospitality Design and Menu Planning. The current student menu is called Taste of Asia and was created by the graduating bachelor class of March 2017! More information and the menu can be found on OpenTable.